Marine microalgae (phytoplankton) are the dominant primary producers in marine waters and, in the open ocean, they are the only source of primary production.  Consequently, all marine productivity and all marine fisheries (wild caught and aquaculture) are dependent on algae.

The marine environment has historically been a receiving basin for a multitude of pollutants (chemicals, nutrients etc.) from human activities, all of which may impact the marine environment and marine life directly, but which can also impact these indirectly via the food web by having a direct impact on the algae.

As is the case for freshwater algal blooms, marine algal blooms (usually called “red tides”) are a natural phenomenon.  The Red Sea gets its name due to the frequent algal blooms which occur there and, during his voyages along the Australian coastline in 1770, Captain James Cook described extensive marine algal blooms off the coast of Queensland. 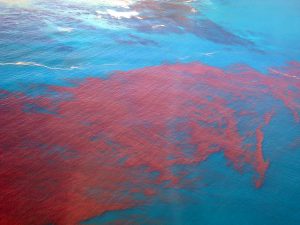 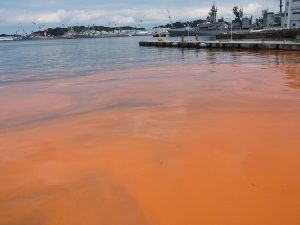 However, human activities, particularly the nutrient enrichment of coastal waters, have increased the occurrence of marine algal blooms.  Large-scale international shipping has also, historically, spread the geographic range of many bloom-forming marine algal species via the ballast water carried by these ships.

Marine algal blooms can cause fish kills and mortality of other marine life as a result of deoxygenation of the water column when the algal biomass is particularly high and/or when this large biomass decomposes.

However, many marine algal species produce powerful toxins.  This is particularly the case for the cyanobacteria, dinoflagellates, diatoms and raphidophytes.  Some of these toxins are toxic to other marine life, but it is those which are responsible for fish kills, due to the presence of ichthyotoxins and those which are highly toxic to mammals (humans in particular), that are of the greatest concern.

Although humans may come into direct contact with toxic marine algae whilst undertaking recreational activities and may suffer a range of allergic reactions. As a result, direct ingestion of marine waters is unlikely.

The impact on humans of marine algal toxins is generally via the consumption of shellfish, crustaceans and fish.  Shellfish (mussels, oysters etc.) are filter feeders, they filter large volumes of water, removing and feeding on, the phytoplankton.  Toxins contained within the phytoplankton cells (generally referred to as “shellfish toxins”) are not toxic to the shellfish and accumulate in their tissues via a process known as “bio-magnification”.

These toxins are extremely toxic to mammals, and when humans consume affected shellfish they can become ill with symptoms ranging from mild to severe and, in extreme cases, consumption can be fatal.

Some tropical reef fish also can also accumulate algal toxins known as  ciguatoxin and maitotoxin causing ciguatera fish poisoning, a condition which can be fatal, when these fish are consumed.

Paralytic shellfish poisoning is a very serious, potentially fatal illness affecting the nervous system.  Symptoms can occur within half an hour to two hours after consuming the affected shellfish.

Symptoms of Diarrhetic Shellfish Poisoning usually appear approximately half an hour after consuming affected fish but last only a few days.

Amnesic shellfish poisoning is also a serious illness that can potentially cause death or coma. It affects the nervous system and the gut and symptoms usually appear within a day of eating the affected shellfish.

The symptoms of Neurotoxic Shellfish Poisoning are similar to Ciguatera Poisoning (see below) but less severe, usually only lasting a few days.

The symptoms of Ciguatera Poisoning usually start between 1 and 24 hours after eating a toxic fish.  This illness can be fatal.

Some examples of marine algae known to produce toxins. 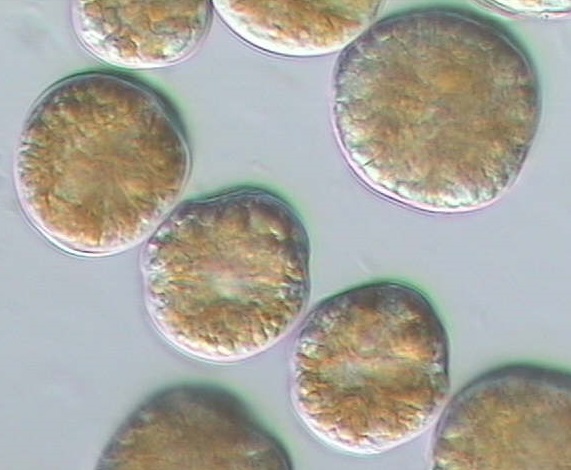 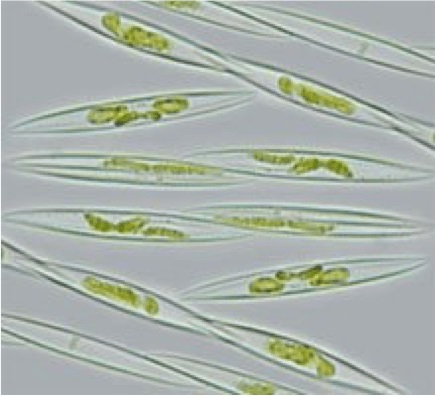 Several species of marine phytoplankton are potentially harmful to fish and have been responsible for fish kills in many parts of the world.  Whilst fish kills occasionally impact wild populations of fish; they are a significant issue for fish aquaculture.

The mechanisms by which these phytoplankton are harmful to fish generally fall into four categories:

These factors can each be solely responsible for fish mortality or can have a cumulative impact, or they can lower fish health substantially such that other factors, especially disease, ultimately kill the fish.

Some examples of marine algae known to be harmful to fish.

Climate change is having an increasingly significant impact on the occurrence of harmful algae, and harmful algae blooms worldwide.  The consensus among algal scientists is the frequency, duration and intensity of harmful algal blooms will all increase globally as a result of climate change.

With respect to those species of marine phytoplankton which produce shellfish toxins and those species which are harmful, for these species to be potentially problematic the biomass (cell density) of algae required does not need to be such that it constitutes an algal bloom.  In fact, toxin concentrations can be at harmful levels when cell density is relatively low.  Many of these species are potentially problematic at cell densities as low as 100 cells per litre – a typical marine algal bloom, or red tide, would have cell densities well in excess of several million cells per litre.

As such, detection of these species, and especially detection of changes in concentration at such low cell densities, is best carried out by skilled algal taxonomists using microscopy.